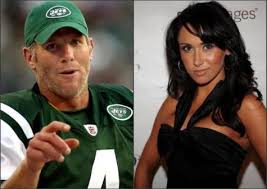 Sending dick pics is a power move.  When a man sends a dick pic to a chick then there isn’t much that can really be taken other than “This hog is yours for the taking, baby.” When a famous athlete sends a dick pic to a female, especially a female who is not that athlete’s significant other, then she just has to hear a cash register opening up in her head.  The only difference between these two aspiring photographers is that Favre was dumb enough to send his dong to a pretty little game day host for the Jets.

This former safety for the Atlanta Falcons was caught soliciting oral sex from an undercover officer on the eve of Super Bowl XXXIII.  What made this incident worse for Eugene is giving up an 80-yard touchdown pass to Rod Smith during the game which Atlanta went and lost to the Broncos.  Is looking for a hummy from a pro such a bad thing the night before one of the biggest games of this guy’s life?  No way.  He just needed to relax. It’s not like Eugene Robinson was a bad guy.  That same season, he was given the Bart Starr award for having high moral character.

When you’re one of the greatest soccer players to ever set foot on the pitch (just learned that it was a pitch during the World Cup), then you are entitled to pull as many females out of the club and take them back to your hotel room for a little after hours.  The thing with that is make sure these females are in fact females.  In 2008, Ronaldo pulled three females out of club in Rio De Janeiro and brought them back to his hotel.  The four of them got back, Ronaldo found out they were dudes, damage control ensued.  Two of the transformers agreed to the payout Ronaldo offered but the third decided to extort the soccer legend which led to a fight breaking out in the hotel.  Just boys being boys I guess.

Poor Rick Pitino.  Louisville’s head hoops coach was caught running around on his wife back in 2003 with a waitress at some restaurant.  Now, what makes this a bit more embarrassing is that Coach was charged with a 15-second violation.  This broad had to of been a dime piece, a virgin, or both.  15 seconds!?!?!?!? Well, coach had the last laugh with sending this tramp off to the clink for 7 years for extortion.