Sunday was a rough day for selecting a quarterback. Our top 5 picks (Peyton, Rodgers, Carr, Taylor and Dalton) were mediocre, as were the other QBs on the day. When QBs aren’t getting it done, the remaining picks must be spot on.

We received a lot of flack from our readers for our love fest for Charles Clay (TE in 3 of our lineups), yet Clay turned out to be the star of the day, putting us in the money with 23.10 point in our lineup of Rodgers, Cobb and Jamaal Charles.

Yet winning one lineup isn’t going to help us all retire, so it’s time to set one final Monday/Thursday Night Football lineup to secure a profit for the week.

Matt Stafford is going up against an overrated Seahawks secondary. Yeah, we said it. They may be ranked 4th against the pass, but when Tampa Bay is 3rd, and the Bears are 5th, we’re not putting much weight on that stat.

You don’t sit at 1-2 with a dominant defense.

With the Lions at 0-3, and Detroit fans burning Stafford jerseys, the Lions’ signal caller won’t be holding back. The Lions are aiming for the jugular to save their season, and Calvin Johnson and Ameer Abdullah will be the two primary targets on the day.

Matt Stafford’s worst start this year? 246 yards. He’s putting up stats, whether in a shootout, or in garbage time.

We also like Arian Foster to return to form against the Colts this Thursday, who rank 25th against the run. DeAndre Hopkins should see the most action through the air for Houston, whether that be Hoyer or Mallett at the helm (Hopefully Hoyer).

On the Seahawks, we look to Doug Baldwin and Jimmy Graham to put up the most Seahawks points on the night. With no Marshawn Lynch, look for Wilson to rely on his TE to pick up short yardage, especially in the red zone.

We don’t love Indy’s offense this Thursday (Andrew Luck or not), hence our pick of the Texans D. Yet if they end up near the goal line, we like Frank Gore’s chances of forcing one in for 6.

Here’s our top lineup for Monday/Thursday.

Enter your 1 free lineup below, courtesy of bigplay.com 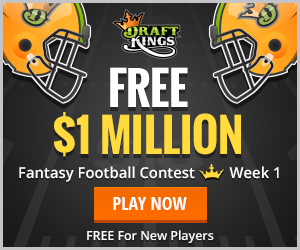