From the outside looking in, you might wonder exactly what the hell is going on with Cleveland and the greatest basketball player in the world.

As reality has set in and the euphoria of being reunited (and it feels so good!) fades, we take a look at the tumultuous relationship with Cleveland and LeBron James.

The guy was on the cover of Sports Illustrated as a high school junior. From the moment he stepped foot on a basketball court, he was clearly something special.  When the Cavs secured the number one overall pick and the right to draft him, Cleveland fans tempered their expectations.  Sure, we thought he was going to be something special, but we were ready to experience some growing pains. Then he went out and put up 25 points on 12 of 20 from the field, along with 9 assists and 6 rebounds in his first ever NBA regular season game.

As Jim Rome would say, “nothing ever lives up to the hype…except LeBron James”

Every step of the way, LeBron met or exceeded everything in his basketball career.  He dominated in high school, was drafted first overall, and then won the Rookie of the Year.  He scored the most points ever by a “prep-to-pro” player in his NBA debut (25), was the youngest player ever to score 40 (41 actually) in an NBA game, and joined the Big O and MJ as the only players to ever average 20-5-5 in their rookie years. At age 20, he became the youngest ever to record a triple double, along with the youngest to ever be named to the All-NBA team and subsequently the youngest to ever win the MVP of the All-Star Game, as well as the youngest to ever average 30 points a game when he averaged 31.4 in 2005-06.  He also posted a triple-double in his first playoff game that year.

Everything was fucking butter from day one, culminating in his epic performance in Game 5 of the Eastern Conference Finals in 2007 against the Detroit Pistons, in which he scored 48 points, along with 9 rebounds and 7 assists, including 29 of Cleveland’s last 30 points and the game winning layup with two seconds to play.

Then, shit got real in the Finals, as the Spurs swept the Cavs with ease in 2007. 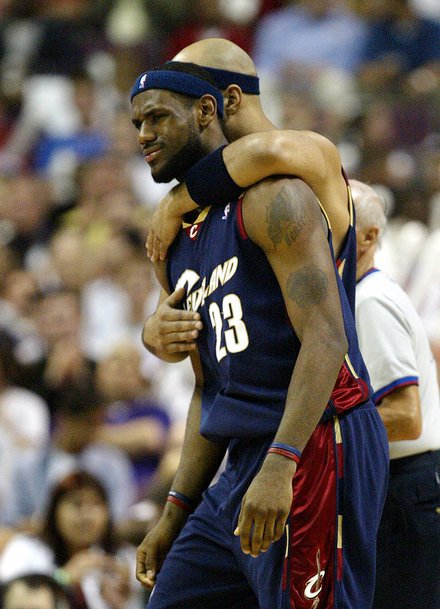 In the 2008 playoffs, James would put up another epic performance against the Celtics, before losing in the seventh game.  In 2009, James was utterly brilliant against the Magic in the Conference Finals,  after the Cavs swept the Pistons and Hawks in the first two rounds.  In Game 1, he scored 49 in a losing effort, and hit the game winning three at the buzzer in Game 2.  The latter was, at the time, undoubtedly the greatest fucking pandemonium moment in Cavaliers’ history.  But James and the Cavs would ultimately succumb to the Magic in six games, closing the book on the last positive effort James would have in a Cavs jersey in his first term.

As we are now aware, there was a reason James, Chris Bosh, and Dwyane Wade all signed similar short-term extensions after the 2008 Olympic Games.  And even though James’ Cavaliers were the best team in basketball in 2010, he began to set the wheels in motion to grease his exit out of Cleveland during the playoffs.

Against the Bulls, in a game all but won by the Cavs, James shot a late free throw left-handed…implying he had sustained an injury to his dominant right elbow.  He would proceed to play the worst basketball of his career in the second round against the Celtics, blaming his elbow all the while.  To Cavs fans and loyal James followers, it appeared as though he wasn’t giving his usual effort, resulting in a performance far below his typical virtuoso games.

The Cavs lost again, and LeBron left for greener pastures. After James went to Miami, it was easy for Cavs fans to hate him.  We were scorned and filled with spite.  We assumed he wanted out since 2008 and preemptively made up the elbow injury to explain his poor play against Boston.  If he won a title in Cleveland in his last year of the deal, there’s no way he could leave and go play in Miami with Bosh and Wade, right?  So it made sense that he threw away the playoffs to make it happen and take the easy way out.

Then James faced Dallas in the 2011 NBA Finals and something strange happened.  He didn’t play well.  He didn’t look like himself.  Suddenly, the best player in the world on the sport’s biggest stage looked just like the guy who couldn’t get it done in Cleveland.  Sure, Cleveland and everyone else who despised him for The Decision reveled in his misery.  But what emerged was something we could have never expected.

Since James went above and beyond all expectations, we wound up placing him on an incredibly high pedestal with no basis in reality.  Because of all his unbelievable early success, we never in a million years  imagined him wilting under the weight and pressure of all those expectations in the NBA Finals.  But he did, and it was pretty crazy to witness.

Until the 2010 playoffs, James’ was utterly magnificent in big games.  But imagine playing so well, being regarded as the best player in the world, and still not being able to win when it truly mattered.  You’re incredibly competitive, but your absolute best is still not good enough.  You leave and join up with two other superstars, and yet you find that even with them, you’re not good enough.  You doubt yourself and it affects your play.

The Oklahoma City Thunder got James over the hump.  It was a team that was a great matchup for the Heat, and they took full advantage of it and went on to win James’ first title in the 2012 Finals.  He was marvelous, magnificent, and MJ-esque.  He got it done.  He got that monkey off his back.  He proved he could do it.  It was a thing of beauty.  Even for a jilted Cavs fan, we admired the way he did it.  The bittersweet “what could’ve been” for basketball fans in Cleveland.

We realized that James was not an infallible basketball god, but a man of flesh and blood.  A freak of nature, but one with nerves that felt the pressure.  He didn’t throw the series against Boston, he just struggled under the magnitude of the brightest lights on the biggest stage.  He had realized his own mortality in the 2007 Finals, and struggled in the playoffs the next three years.  Because of all the amazing milestones he surpassed at such a young age, we assumed he had that same killer instinct and ice water that flowed through Jordan’s veins.  Instead, he was an individual unique in his own right who needed experience and time to figure it out.  And figure it out he did.

When the Spurs dismantled the Heat in the 2014 Finals with surgical precision, there wasn’t the same sense of revelry as when James was falling to Dirk and the boys in 2011.  Sure, it was good to see James miss another ring, but it was different this time.  It was strange.  The vitriol somehow had subsided, and the promise to hate him forever seemed distant.  Subtle tones over the past four years from James seemed to indicate he was aware of the trauma caused to Cleveland by the decision and that he wished he’d done it differently.  It was a salve to a wound slowly healing.

Once James opted out of his contract, it seemed the move was only to help Miami financially.  The shallower and more outspoken in Cleveland were screaming for James to come home, seemingly forgetting the pain of his betrayal.  But as the signs began to indicate the actual possibility of a return, people began to come around.  We started to rationalize it out and come to grips with how we could accept our own prodigal son in the event he came home.

And on July 11, 2014 James once again exceeded all expectations by executing the announcement of his return with perfect tact.  A subtle announcement on his webpage.  A letter from the heart acknowledging his mistakes, explaining himself, and making plea to the city of Cleveland to let bygones be bygones.

All the hate seems so stupid now.  Four years go by fast.  The Cavs are in position to bring Cleveland a title for the first time in 50 years.  The most famous athlete on the planet, the biggest superstar in professional sports picked Cleveland, OH.  He didn’t bring any superstars with him.  He didn’t take the easy way out to a city with the best lineup or the brightest lights.  He was humble and contrite.

Who says you can’t go home?