The MLB isn’t helping itself attract more followers, which means its extinction could be in the near future

Baseball is defined as America’s past time, which is exactly what is stated – just a past time. Over the years, baseball ratings have absolutely plummeted. And even worse, the Collective Bargaining Agreement has now made another strike on the verge of happening for the first time since the 1994-1995 season.

Watching baseball games has become less enjoyable with how long the games take, and most of all, the length of the season in general.

Covering 162 games and a postseason sounds like one of the most time-consuming things I could imagine.

Major League Baseball has given us more home runs, but it just hasn’t cut it. Why? How is it that kids have forgotten about one of the most beautiful, tactical, and strategical games to date? How have people forgotten the rich history within organizations that attending games is such a privilege?

I never thought I would see the day I reference “when I was a kid,” but today is the day. Growing up, I fantasized about one day walking into Fenway Park, taking a tour of the old Yankee Stadium, playing at Jacobs Field, hitting a dinger into the harbor at Oracle Park, but most of all just taking in that moment and embracing the incredible history of this nation’s greatest past time, baseball.

Why has baseball become so hard to watch?

Maybe it’s because games can go on for 12 hours if it goes into extra innings? Or, it’s hard to invest your time into 162 games?

This may be the reason why I hear so many different people say, “I love playing baseball, but I can’t watch it.”

The average time for a baseball game is three hours and five minutes, compared to the NFL who averages three hours and 12 minutes. Why the drastic decline while the NFL is on the rise? It has to be the amount of action.

Now the league is trying to figure out a way to limit defensive strategies as far as shifts in order to allow more hits to breakthrough and hopefully create more runs. Sounds almost like Rob Manfred, MLB Commissioner, is taking a page out of the NFL Commissioner Roger Goodell’s book. Manfred is trying to limit defenses in order to provide more entertainment through runs.

With the expansion of technology and people’s attention spans becoming shorter, Major League Baseball needs to do something before it becomes a non-profit organization like the NCAA.

Below is a graph of the World Series ratings since 1984. Over the past 10 years, the highest rated World Series was between the Houston Astros and the Los Angeles Dodgers. 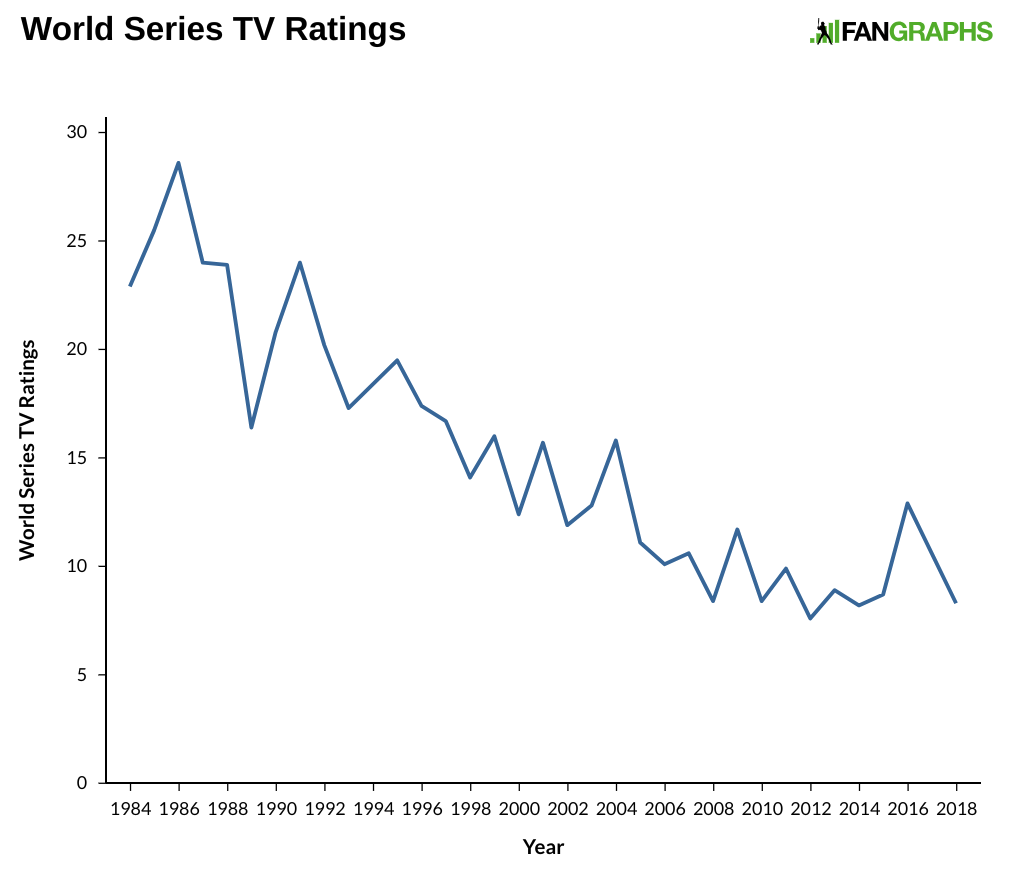 The Collective Bargaining Agreement is going to put baseball in a strike sooner rather than later.

We are under a month away from Spring Training, and we still have no idea where Bryce Harper or Manny Machado are going to lace their cleats up at. These young stars, who are marketed like big names such as Alex Rodriguez, Ken Griffey Jr. and Derek Jeter in the past, have still not signed with a respected ball club. The same two players two years ago were fantasizing about having two of the biggest contracts in baseball have no home yet.

There are five MLB teams out of 30 total making a run at two All-Stars. Players will have to stick with this agreement until 2021 when it expires. Until then, be prepared for big names to get screwed continuously, resulting in athletes like Kyler Murray choosing the NFL over the the MLB because the latter sport doesn’t look out for its athletes.

To summarize the CBA, the players are making way less money than was expected when they were first in the league and it’s not even close. For instance, Harper was estimated 400 million when he first got in the league and Machado was up in the 390 million range. Machado was offered by the White Sox 200 million and Harper was offered by the Nationals 350 million(which isn’t too far off). The reason it’s so bad is that teams are now afraid to go over the luxury tax which was structured in the CBA in order to stop big spending organizations from getting all of the players. In turn, this has made those big contracts we all used to know and love are rarer. If you would like to look at the Collective Bargaining Agreement its entirety, click here.

Attending MLB games isn’t what it used to be like.

As a kid, my family would go to a Cleveland for a whole weekend. I would look forward to that weekend not because I was going an hour north to say in a hotel with people I see every day of my life, but because we would go to a Yankees and Indians game. For one, I would always hear about the 20 something World Series for the Yankees, and they would also always have the greatest players.

As a player, you hated but respected Jeter and all the storied history of the Yankees. I don’t see that in the generation coming up. I see a small group compared to the large number that used to love, understand and grasp the history of baseball. I remember doing projects on Jackie Robinson and Bob Feller. I used to make sure that I had my radio on during the games because Tom Hamilton was announcing. Not to mention the sweet smell of spring as Journey is playing in the background pulling up to Jacobs Field and knowing the legends that have walked into the stadium.

Below is a graph in the of the decline in attendance for the 2018 season. It saddens me to see my Cleveland Indians being in the top 3 of this category in the MLB after only two years removed from being in the World Series.

No matter how you look at it, baseball is sliding towards death since its birth in 1869 in Cincinnati, OH. It has had beautiful days like everything else in the world, but it also has had very dark days. I pray that I get to watch the resurrection of one of the greatest sports I ever had the privilege of playing.

I hope today that I didn’t write an obituary to America’s Past Time and instead sparked a movement to make it simply, America’s Game. So, for now, I am going to watch Field of Dreams, The Sandlot, Major League I & II, and Hardball with my Indians hat on and sunflower seeds by my side. It’s Baseball Season!