Love him or hate him, you can’t deny his passion and desire to win a football game. He’s single handedly willed the San Diego Chargers to any amount of success they’ve felt over the last few years. Like clockwork, the Bolts are plagued by injuries every single week. Rivers is one man who doesn’t seem to get hurt…or at least, let anybody know when he is. 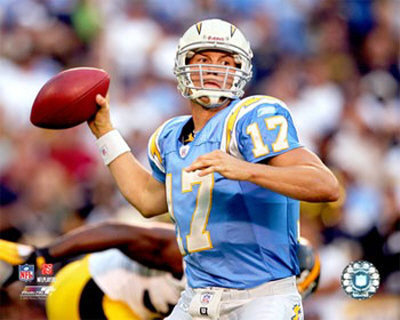 Currently, Drew Brees holds the record for completions in a season at 468. Rivers is on pace to land 471 completed passes. Peyton Manning holds the trophy for most passing yards in a season at a whopping 5,477. Phil is on track to rack up over 200 more yards than that.

Difference between Brees and Manning, and Rivers? Their teams were good. He is unnoticeably surpassing legends on his own. Mind you, his favorite target, Antonio Gates wasn’t present for the first 4 games of the season. Since he’s been back, they’ve been ‘Opening the GATES and letting the RIVERS flow’ which has contributed to his pigskin throwing success.