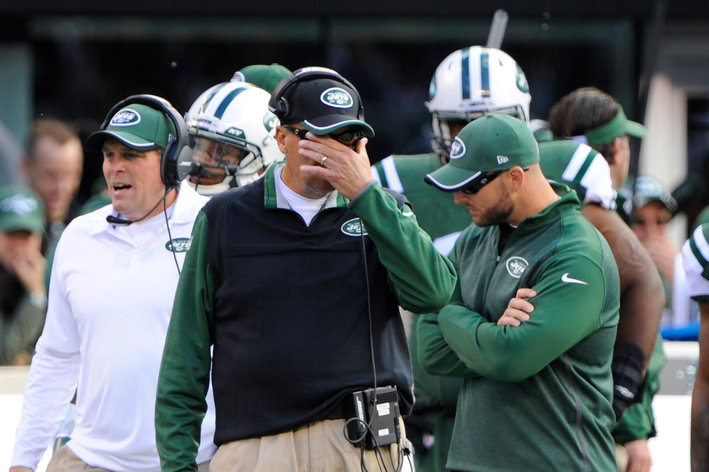 We can’t watch either, Rex.  It’s been coming for a while now, but it’s officially official:  the Jets are the worst team in the league.

Raiders move up to make room for the Jets.  They’ve played a few teams tough enough to get out of the cellar, and Carr is going to win them a game or two soon enough.

Jags letdown the fans after going all in to sneak one from the Browns.  Pretty surprising discovery in Denard Robinson at RB is really the only silver lining on the team this year.

You know how much corn costs in Tampa Bay?

Historic meltdown across the pond for Atlanta.  Mike Smith’s a dead man walking.

So they completely went all in to beat the Seahawks, and then promptly got blown out by a so-so Kansas City team.  Time to draw up a few dozen more trick plays in St. Louis.

Earning a road win is a positive in the NFL, even if it was against the Buccaneers and you had to go into overtime to do it.

Doesn’t look good for the G-men with Indy, Seattle, San Fran, and the Cowboys in a rough stretch after the bye week.

Utterly embarrassing beat down for Chicago.  If Trestman didn’t leave the starters in after the game is already decided, this would’ve been a much wider margin.  Chicago is lost and there’s no rescue in sight.

With RGIII coming back any week now, Colt McCoy leads the Skins to a gutsy victory at Dallas against the hottest team in football.  Two solid wins in a row for rookie head coach Jay Gruden is a step in the right direction.

Haven’t won in three weeks and couldn’t put up a touchdown against Seattle at home.  Panthers need to significantly improve their red-zone offense if they want to make any noise this season.

The defense took advantage of the awful Jaguars en route to their second straight win.  The season opening win against New England looks impressive, but not those over the Bears, Raiders, and Jags.

Houston’s the definition of “not too shabby.”  Solid defense but an offense that is too unreliable will keep them right in the middle of the pack this year.

Kyle Orton has led the Bills to two straight, albeit against the Jets and Vikings.  Let’s temper our expectations with the future Toronto Bills.

Impressive wins against New England and San Diego this year have made us forget the loss to Tennessee to open the season.  Andy Reid’s team could be poised to go on a run here with the Jets and Bills coming up next.

The Steelers’ offense really woke up against a tough Indy team.  Could this be a turning point for Tomlin’s team for the better?

It was close for most of the game until the Browns broke out in the fourth quarter.  A much needed win against a team they were supposed to beat after losing to Jacksonville.  The story is the same against Tampa Bay this weekend.

It was a well fought victory for the Bengals at home against the Ravens.  After being blown out by Indy, we’ll keep them in the same spot pending further big wins.

That definitive loss to Denver looms as San Francisco comes off the bye with a slate of “should win” game against St. Louis, but can they win in New Orleans next week?

Chargers looked great two weeks ago, but  looking back, the only tough win was against Seattle.  The hot streak could’ve been the result of a favorable schedule.  Losing to Denver is one thing, but if they fall to Miami this week, the fraud could be exposed.

Inner turmoil brews in Seattle.  Harvin is gone and is Beast Mode close behind?  Pete Carrol has his work cut out for him if he’s going to get his squad back to the promised land.

What a comeback for the Lions in London.  Leaping their way back from 21 down in the second half while dealing with jet lag is a huge, huge win.  This team is an incredibly silent 6 – 2 already with a very favorable schedule.  You can already book them for a home game in the playoffs.

Disappointing loss to Pittsburgh when Indy was looking very, very good.  A good team can bounce back from a thorough beating, so it’ll be interesting to see if Indy can go into NY and beat the Giants on Monday Night Football.

Baltimore  blows out some weaker teams and then can’t outlast Cincinnati.  This is a good team, but doesn’t seem like a great squad.  Pittsburgh will be a great test to see how the AFC North is going to shake out down the line.

The loss wasn’t as bad as the score would illustrate.  Shit went south real quick for the Packers, and the explosive New Orleans offense at home struck again.  We’ll leave them at six for the body of work and not overreact to an aberration in New Orleans.

Tough loss on the road to the surprisingly good Cardinals.  However, you can’t lose on a 75 yard bomb with under two minutes to go.  It just can’t happen.  Not against anyone.  That’s Madden shit right there.

Washington played very well to upset the Cowboys, even with Romo missing most of the second half.  Bottom line:  if Brandon Weeden is one hit away from being under center, the Cowboys are in trouble.

Took an amazing bomb from Palmer to Brown to get over the Eagles at home, but they did it.  With their only loss coming against Denver, maybe the Cardinals are legit as fuck?  We’ll find out against Dallas, unless Romo doesn’t play, then they’ll win easily.

New England is on fire.  The reports of Tom Brady’s demise were bullshit.  This guy is a gun slinger, and Tommy Uggs once again has everyone afraid of the Pats.

They’re simply the best.  However, since no team has won their next game after being placed atop these rankings, your lock of the week is New England straight up over Denver on Sunday.