Mayweather vs Pacquiao is finally a done deal.

“I am glad my decision to meet with Manny and discuss making this fight happen helped get the deal done,” Mayweather said. “Giving the fans what they want to see is always my main focus. This will be the biggest event in the history of the sport.”

“Boxing fans and sports fans around the world will witness greatness on May 2,” Mayweather said. “I am the best ever, TBE, and this fight will be another opportunity to showcase my skills and do what I do best, which is win. Manny is going to try to do what 47 before him failed to do, but he won’t be successful. He will be number 48.” 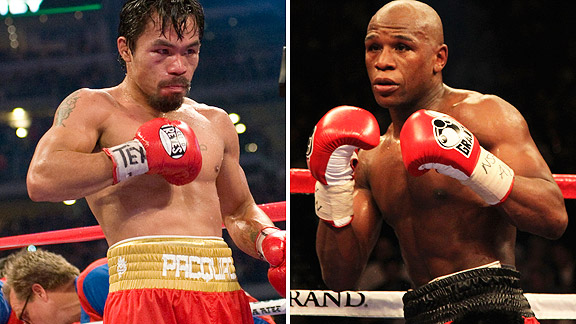 Pacquiao issued a statement shortly after the fight details were finalized and made public.

“I am very happy that Floyd Mayweather and I can give the fans the fight they have wanted for so many years,” Pacquiao said. “They have waited long enough and they deserve it. It is an honor to be part of this historic event. I dedicate this fight to all the fans who willed this fight to happen and, as always, to bring glory to the Philippines and my fellow Filipinos around the world.”

Here’s the tale of the tape:

At 37 years of age, Mayweather will look to use his quickness and 5 inch reach advantage to frustrate the 36 year old Pacquiao. Get ready for a battle. A 60/40 split battle that will gross in excess of 400 million dollars.

And get together with your friends to watch it go down, because the HD pay-per-view will cost $99.95.