Nobody saw this coming… but we should have. Not only was Hill an absolute high school stud in Texas at Southlake outside of Dallas, but he has several other things in common with Manziel that makes us think the Aggie faithful will quickly forget about their Heisman winning playboy.

The Manziel family name carries big weight in Texas. If Johnny Football wasn’t gifted with a powerful arm, he’d still be living it up in Las Vegas every weekend with his family’s oil money — lets just say no Manziel will go hungry for a long time. 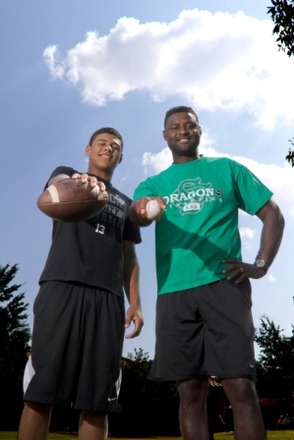 Mr. Hill also comes from a nice pedigree…. his father was MLB All-Star pitcher Ken Hill Sr. who finished with a career 117-109 record and pitched in the 1995 World Series for the Cleveland Indians (HELLO, THEY ALSO BOTH HAVE TIES TO CLEVELAND!).

Similar to Johnny, Kenny has a love for enjoying life to the fullest. Earlier this year, he was arrested for public intoxication and according to the local College Station paper, The Eagle, he was quite drunk:

“Hill was passed out alone in a planter full of rocks and plants in front of the restaurant-bar when officers arrived, police said in the arrest report.”

When asked who the current president of the United States was, Hill reportedly answered “Bush” and told officers his name was “Kennedy,” authorities said. Police also said Hill was unable to tell them where he was.”

College football fans have a lot to look forward to this season both on and off the field with Kenny Hill. More importantly, how jealous do you think Johnny Football is to see his protege already breaking his records and living the frat life while he is stuck in Cleveland?

Too early to crown him Kenny Football?