Perpetual fuck up Josh Gordon has penned a heartfelt and honest letter to sports personalities concerned with his well being.  Gordon specifically addresses Barkley, Stephen A. Smith, and Cris Carter, who have all expressed concern and an ominous feeling for how the immensely talented receiver’s life will go.

Gordon begins by calling out Barkley, Smith, and Carter for never even meeting him, and yet speaking about his condition.  It’s a solid job by Gordon, exposing the perceived faux concern these guys have for the receiver.  After giving details to his sides of the stories leading to his troubles, he offers some sharp criticism of the pundits.

To those of you who traffic in lies and innuendo over fact, with seemingly no consequences for your actions …

I really don’t know how you get away with it.

He does own up to all the bullshit he’s been up to and apologizes:

First, words cannot express the remorse and regret I feel over this latest incident. I acknowledge that the repeated transgressions that have led up to this point have damaged my credibility, and for that, the only person to blame is me.

I have let down many in Cleveland — my Browns teammates, our hard-working coaching staff, the team’s ownership, and the loyal fan base that wants nothing more than to win. Playing there is different than in many other cities. We feel the fans’ pain. We know how important this is to them.

Gordon then gets into why he’s fucked up so much, explaining he was raised by a single mother in a bad neighborhood and ran with the wrong crowd.  He illustrates that overcoming this to make it to the NFL means he actually succeeded.  While it sounds like he’s making excuses for his behavior, he addresses that too:

Again, I make no excuses for my past. That culture didn’t make me do anything I didn’t want to do, but when you judge me without actually knowing me, you deny the existence of the world I come from.

He then makes excuses his violations by explaining his DUI was “just .01 over the legal limit” and that his drug suspension in 2014 was due to “inadvertently inhaling second-hand marijuana smoke last offseason.”  These two violations led to the 10 game suspension in 2014. Gordon directly addresses his latest transgression, testing positive for alcohol, by whining about the unfairness of it all (emphasis his).

As a strict condition to my reinstatement in Week 12, I had to agree not only to abstain from drinking for the rest of the season, but also to submit to an alcohol screen as part of my in-season drug testing under the league’s substance-abuse protocol. Did I think that was excessive given I had never had any issue whatsoever with alcohol? Yes. Did I think it was hypocritical that a professional league making hundreds of millions of dollars off beer sponsorships was telling me not to drink? Yes.

There’s no arguing the hypocrisy of the NFL knows no bounds.  Gordon is apparently unaware of his own hypocrisy in the letter, as he attempts to mitigate the severity of his wrongdoing by pointing the finger at perceived unfairness.

I boarded a private flight to Las Vegas with several teammates. During the flight, I had two beers and two drinks. It was the first time I had consumed so much as a drop of alcohol since July 4, 2014, the day of the DWI.

Upon landing, I received the all-too-familiar notice by phone that I was to report to a testing location within four hours. I failed the test, obviously, and the rest is history

Once again, Gordon pleads that it really wasn’t his fault, all the while admitting it was his fault.

It doesn’t matter if I thought that the league-imposed restriction on drinking had expired at the end of the regular season; what matters is that I didn’t confirm whether or not that was the case.

All in all, it’s difficult to feel any sort of empathy towards Gordon at this point.  Sure, it’s admirable he was able to escape what he describes as a difficult childhood to make it to the NFL.  Really, he’s made it this far on his God-given abilities in spite of his own stupidity.

Granted, everyone makes mistakes.  Everyone has bad luck.  Gordon, however, wants you to believe he has only made a few, very minor mistakes that he happened to have the misfortune of timing awfully.

There’s no sob story or critique of the unfairness of the rules that will change that.

Just shut up, go away, and take your punishment.

Come back, follow the rules, no matter how unfair you think they are, or go do something else with your life.

You can read the letter in its entirety at The Cauldron. 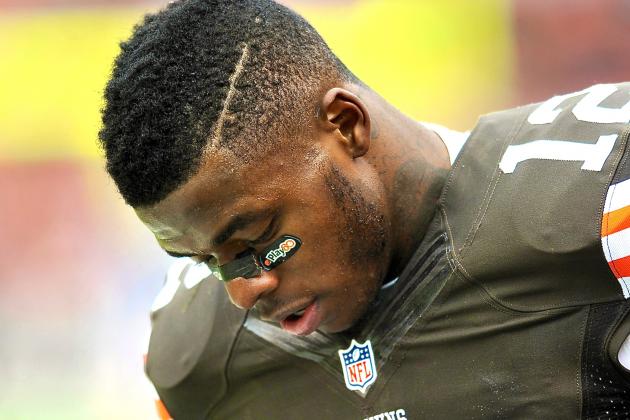