Stories of former pro athletes getting into trouble after their playing careers are the best.  Former Carolina Panther and Cleveland Brown, Armond Smith was charged with theft after gripping a $500 leaf blower out of a pick up truck and putting it in the back of his own, according to Aimee Jones of the Rockdale Citizen. Smith couldn’t rake up enough interest (see what I did there?) in the NFL as his career was cut rather short.  So naturally after a 3 year career, it was time to steal leaf blowers. Better than robbing someone of a $150 cell phone at gunpoint, right Maurice Clarett? 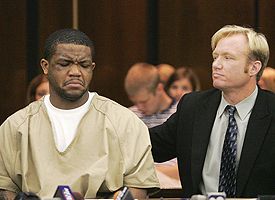 Everyone should just leaf (see what I did again?) Armond Smith alone on this one. He’s got leaves to blow in a couple months.