First of all, Jordan Palmer is the man…. more on that later.

Da Bears defense, yikes. I know it’s just preseason, but our pass defense looked like swiss cheese out there which is a huge  concern seeing how we’ll be facing Aaron Rodgers (twice), Tom Brady, Colin Kapernick, Matthew Stafford (twice), Cam Newton and Drew Brees this season. Don’t think the Bears defense we’ll be a popular fantasy pick this year. Giving up 160 yards to Blake Bortles is unacceptable, I don’t care how much Jon Gruden kisses up to him.

I’m still optimistic they’ll be able to figure it — there was some nice pressure placed on Chad Henne early on by our starters, especially Jared Allen and Jonathon Bostic.

So the D might give up a ton of points, but after tonight I’m as confident as ever in Jay Cutler and our starting offense. Cutler played limited time, but he looked relaxed and poised in the pocket — and you would too if you had three beasts to throw to in Brandon Marshall, Alshon Jeffrey and Martellus Bennett. In just limited time (mostly because the Bears defense and special teams couldn’t keep the Jags off the field), Cutler went 7-9 with a TD pass to Marshall. He’ll be a fantasy steal this year and will drop to the later rounds just because people will listen to the ESPN talking heads go on and on about how “Cutler isn’t a leader” and doesn’t deserve to be labeled as a top 10 QB. A healthy JC will be an unstoppable force this year. Watch out. Ok, so our offense starters looked good, so what about the back-ups?

Trestman better not keep Clausen as QB2 after last night’s display by Jordan “Big Pimpin'” Palmer. The guy is awesome. Had complete control over the offense as he led them on two scoring drives and grabbed victory from the jaws of defeat. Love the facial hair, love the old school look, love Palmer. Plus, Jimmy Clausen is still a Notre Dame douche. 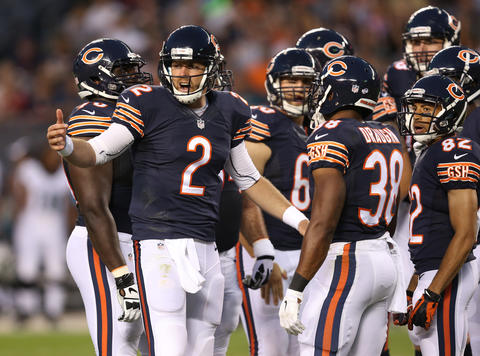 Another positive tonight, Ka’Deem Carey. Thought he was exciting to watch every time he touched the ball — either going to get stopped for a one yard gain or do a Madden spin-a-rama move for a quick 20 yard pick up.

Overall, despite the poor showing from the D, I’m still pumped about this team.

PS — Did anyone else catch Gruden comparing Bortles to Ben Roethlisberger? If I was Blake, my response to Jon would’ve been “I actually don’t plan on raping any girls at a dive bar in Georgia.” Honestly, never compare people to Rapesberger, Jon. He’s a fucking loser, I don’t care how many games he wins.