So  I went to my first baseball game this year the other day (roll tribe).  When I go to a ball game, I like to enjoy the moment, have some pops, and bark at the opposing team.  Don’t get me wrong, football is king, but there is an aura that comes with baseball that cannot be topped.  Maybe it’s the beautiful weather we are sometimes blessed with in Cleveland or maybe it’s the fireballs we shoot before the first pitch.  Either way, it’s awesome.  And since I am picky about my game day colleagues, the following will show you what really grinds a tuna’s gears throughout a day at the park. Click next to continue.

This is a huge demographic.  You have everything from the grandpa doing a crossword puzzle to the guy who burned a ticket on a hard 7 just to maybe get to second base.  If you’re going to the park, take in the game.  Now, we all know that brunette (personal preference) is sitting right next to you with her nose buried in her phone.  I get it.  But that dude with the crossword puzzle trying to find a word for a Japanese board game? Pay attention or GTFO. 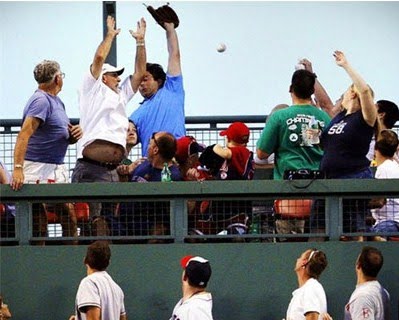 This guy has a family.  He answers the bell every morning and goes to work to provide for his family.  Unfortunately, this dick nose brings a mit to the game so he can shag home runs off the home team.  You my friend, suck hard. Yes, its ok for the naked guy skipping across the field to get the boot. But at the game this past Friday, the Rockies went yard on the Tribe and some dude who was a tribe fan caught the home run.  Obviously, we don’t want that shit and his seat neighbors told him.  He threw it back. Cops came. They were booed.  Pussification of America ensued.  If you’re reading this, dude man who threw the ball back…just know, that shit was awesome and you my friend, have balls made of concrete.  BTW, kudos to your hot girlfriend for high fiving everyone as you and your party galloped out, I bet you totally did the deed with her that night.

Let’s not get this twisted.  If you’re watching a game on tv and the camera guy hones in on a cougar devouring an ice cream cone, tha’ts cool.  I’m talking the guys who your team hires to walk around the park and capture special moments with the fans.  Dude, we are 9 beers deep and my friend is cross eyed right now.  We do not want a picture.