LeBron has pretty much done the most amazing shit ever since he came into the NBA.  Sure he’s a few titles behind Michael and Bill, but he’s got time.

Perhaps the most incredible accomplishment in NBA history is Oscar Robertson averaging a triple-double for an entire NBA season.  If there’s one player who has the skills to accomplish what the Big O pulled off, it’s LeBron…and this could be the season.

Points are easy for James, who will average his usual 25 a game.  With a dearth of big men, it’s likely to see James play the four for stretches of games, giving him even more access to rebounds.  He’s averaged 7.6 in a season before, so two more a game isn’t far fetched.  And the ability to surround James with a lineup of Love, Kyrie Irving, Dion Waiters, and Mike Miller, expect a higher percentage of his passes to be converted into assists.

In 2014-15, LeBron James will not only win the MVP, but average a triple-double while winning 60-plus games in doing so. 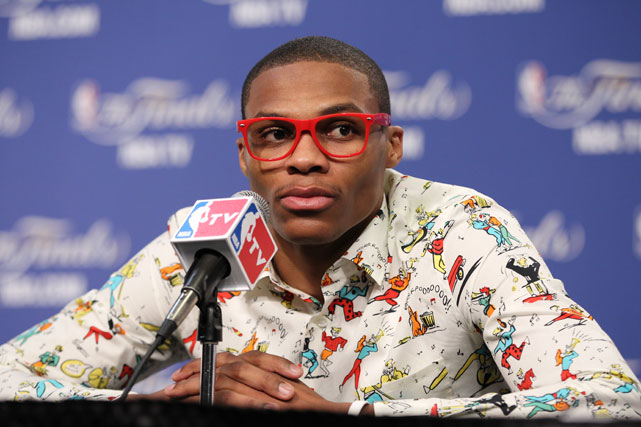 Russell Westbrook will undoubtedly be putting up MVP numbers in Kevin Durant’s absence, but will be keep it going when Durant steps back in to the lineup?

Anthony Davis is going to have a monster year, but won’t have the victories to challenge James.

Two old guys with skills, Kobe and Dwyane, both will have major chips on their shoulders this season.  They won’t win it, but if their teams do well enough and they stay healthy, keep an eye on them.